We can provide the most suitable oxidizer, depend on characteristic features of dryer, because we also design and manufacture dryer by ourselves.
The systems of thermal oxidizer correspond to changes of exhaust gas volume, solvent concentration and operating conditions of the production machines. 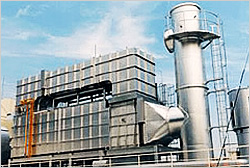 This system oxidizes the solvent at the temperature with 300 ~ 400℃ using platinum based catalyst.
Generally, it uses gas or kerosene as fuel. But depending on the solvent concentration conditions, it can be operated by self-combustion with catalysis only.
In addition, although there is a case that the catalytic function is declined by silicon and metal vapor, it can keep its life longer by using pretreatment (Guard Bed) or Catalyst Rejuvenation.
In this system, the waste heat is recovered as hot water and hot air, or usually re-used as the heat source of the dryer. 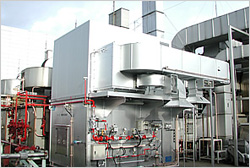 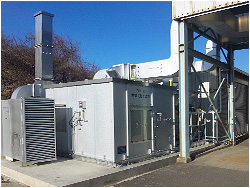 We had developed of economical type catalytic oxidizer using poisoning resistance catalyst and we installed the system in operation for dry laminating machine.
This system adapts “NHP” as poisoning resistance catalyst developed by Nikki- Universal Co., Ltd. who is famous as high quality catalyst supplier. By using “NHP”, the estimated life time of the catalyst becomes 3 or 4 times longer than ordinal one, and the reaction efficiency for ethyl-acetate-containing exhaust gas is improved remarkably with the low temperature in the range of 250 ~ 300℃.
In addition, we propose energy saving system recovering the surplus waste heat to use as heat source for the dryer, and system for CO2 emission treatment.

This system is suitable for low solvent concentration. Using regenerative media, it oxidizes the solvent keeping high heat recovery rate around 80-95%.
The temperature required for this system is 800 ~ 900℃ , which is higher than direct flame type. But by using suitable regenerative media, the running cost can be reduced toward the level of one tenth or twentieth of the running cost of direct flame type. In addition, it can be operated by self-combustion at 500ppm of toluene base. In the case of high concentrated exhaust gas, steam recovery also is possible. 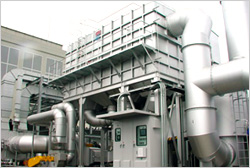 Although the oxidization efficiency slightly down to 80-95%, this system is suitable to oxidize low solvent concentration and low temperature exhaust gas. First, exhaust gas comes through the rotary adsorption unit, called as “Rotor” made by activated carbon or hydrophobic zeolite material, and the solvent is removed or adsorbed here. Secondary, the absorbed and removed solvent is treated by hot air with about 1/10 of exhaust gas volume.
In this way, the exhaust gas highly concentrated about 10 times is treated with smaller oxidizer. At the same time, the recovered high temperature exhaust gas is re-used as the hot air for the solvent removal and adsorption. 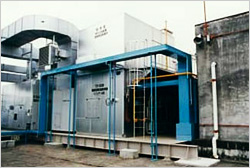